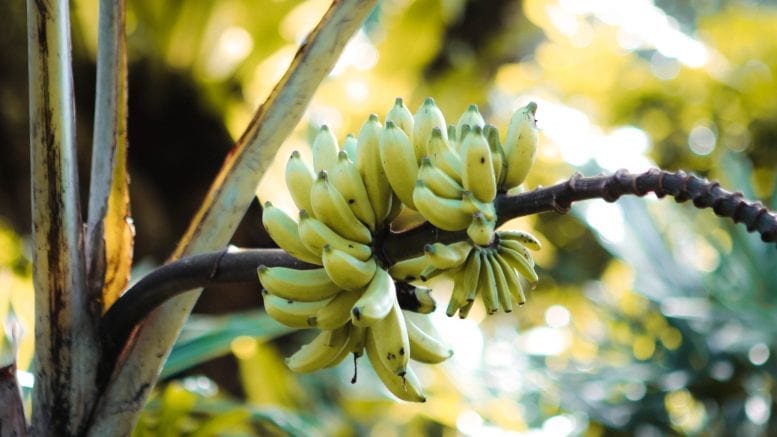 We all know that banana is a rich source of iron and it full fills the requirement of the iron in the body. Let us discover how a banana tree grows and how we get these bananas.

It is a perennial herb and its stem is fleshy and fibrous, just overlapping leafy bases but no wood. Its fruit-bearing process is interesting. Just before the plant bears flowers, it puts out a small flag leaf. Soon an aerial shoot grows through the hollow center of the stem and emerges as a strong thick stalk, which droops under the weight of what looks like a huge bud of purplish or bright color.

The bud is a series of overlapping fleshy bracts that unfold one by one.  They reveal a close-packed cluster of tubular yellow or white flowers which, soon turn into a half-circle of tiny deceptive buds, which consists of male flowers, which naturally do not fruit.

Another interesting feature of the plant is that each bears only one bunch of the bananas and dies. It is actually going by the size of the bunch and its weight, expecting more would be asking for too much and straining the stem which is not possible. On Earth, it flourishes throughout the tropics between 30 degrees of North to 30 degrees of South of the Equator.

The botanist Rumphus thought that the banana first grew on either side of the Ganges river in East India from where it spread to Persia, Syria, Arabia, and Egypt. Banana finds constant reference in Indian culture, religion, and mythology. Buddhist sculptures show banana leaves. Buddhist book of monastic rules talks of a drink Mochapana of banana. The plant is considered to be one of the nine forms of Hindu Goddess Kali.

The monkey God Hanuman is referred to have lived in Kadalivana or the banana garden on the banks of Kuberapuhkarni.

In Bengal, it is considered auspicious to perform the marriage under a banana tree. Banana is one of the most important fruits and vegetable crops in India. Not only is it grown in the fields, but whenever possible, people plant it in their backyard. There are scores of varieties, like nendran, virupalshi or champa, basrai, lal kel harichal, etc. each with its own flavor, aroma and taste, and particular uses and regional preferences.

It is popular all over the country and forms an important item of diet, to the extent that in parts of Southern India, it forms the staple food. Ripe fruits are eaten as desserts, and unripe fruits are cooked as a vegetable. The fruit is processed into flour, confections, jams, and jellies.

The tender white aerial shoot inside the stem is also used as a vegetable once the fruit is harvested. Even the male flowers are cooked into delicious dishes. What else would be the better example of sustainable living one could find when even banana leaves are used as plates? It is nature’s ready-made gift, no processing, and no energy used. Soon after the use, either cattle would polish it off or it merges with the earth.

Why Indians have gone banana over bananas?

The ripe fruit is a rich source of carbohydrates, minerals, and vitamins, particularly, of B-group. The composition varies with the type and also the stage of maturity. Starch constitutes the major carbohydrate of green non-ripped fruit, whereas when it turns yellow, a little hard semi-solid starch hydrolyzes rapidly into soft soluble sweet. Now, at this stage, the banana contains a small amount of fatty oil, which does not suffer any change during ripening.

It is a source of calcium, iron, and a rich source of potassium, magnesium, sodium, and phosphorus. Even the peel is a potential source of pectin. Such is the composition of banana that is virtually a complete diet.

Indian system of medicine had recognized the potential of bananas as a medicinal plant. The ancient texts provide numerous specific uses of banana for health. According to them, ripe banana is emollient, demulcent, and nutrient. The unripe form is cooling, and astringent and the dried form is anti-scorbutic.

Fully ripe banana if taken in the early morning is a laxative. The root is antibiotic and anthelmintic. Banana increases the alkalinity of the blood and thus corrects acidosis due to acid diets as well. It has red blood generating potency as it stimulates the production of hemoglobin.

Unripe banana, dried in the Sun, made into flour and baked into bread, is used in cases of dyspepsia with flatulence and acidity. A slight gruel made of the flour mixed with milk is a comfortable diet in cases of gastritis.

VITAMIN C – WHAT TYPE OF VITAMIN IS IT?

Nutrients that are absolutely essential for our bodies? survival

Be the first to comment on "Banana Builds Blood"