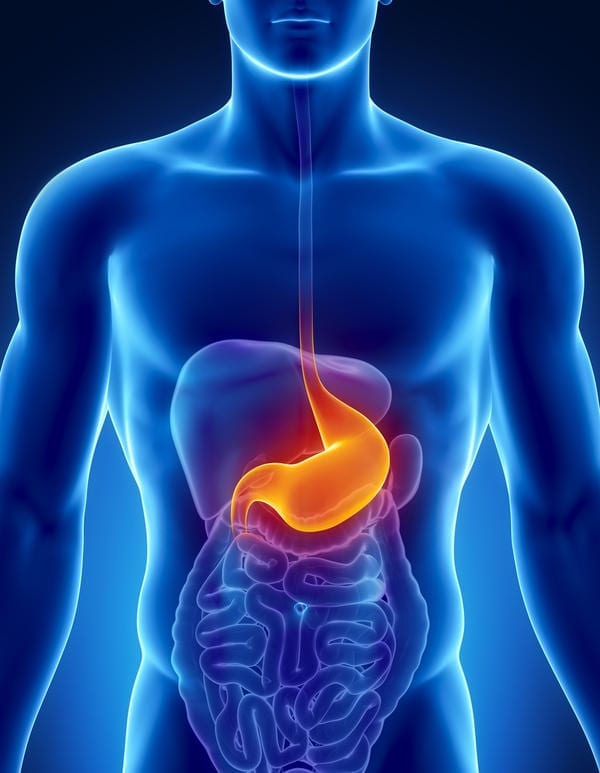 Stomach ulcers are small sores in the inner wall of the stomach. The sores form due to a number of reasons, with the major cause however being high stomach acid production.

The risk of developing stomach ulcers due to Aspirin is higher in people with previous history of ulcer disease and in those with advanced age or serious medical illnesses. Prolonged treatment with medicines called corticosteroids can increase the chance of ulcer formation. Spices, caffeine, alcohol may cause the stomach to produce more acid but, there is no evidence that they can cause ulcers. Their consumption is however discouraged in patients who already have ulcers, because they stimulate acid production by the stomach, which can make the ulcer disease worse.

Overwhelming scientific evidence has shown that high concentrations of alcohol can cause inflammation and bleeding from the stomach lining. This condition is called hemorrhagic gastritis.

People with liver cirrhosis (a shrunken liver) have an increased risk of developing stomach ulcers. The same is true for patients with terminal kidney disease.

Certain hormonal disorders can also predispose to ulcer formation due to high quantities of the microelement calcium they produce. Hormones produced by some of the cancers stimulate the secretion of large amounts of stomach acid.
A quarter of patients with long-standing lung disease may develop stomach ulcers.

Paracetamol, a pain killer, is friendly to the stomach and does not therefore cause ulcers.

Stomach ulcers may run in the family.

Highly motivated executives working in a stressful environment are very prone to developing stomach ulcers. In a few individuals stomach ulcers are due to infection involving the inner wall of the stomach, by a germ called Helicobacter pylori. This germ commonly affects people of low socio-economic status.

Stomach ulcers may be a consequence of acid burns in people who swallow battery acid with the view to terminate their lives.

Retention of stomach contents for a longer time in people with stomach outlet obstruction can lead to ulcer formation. This is due to the fact that the acidic contents irritate the stomach lining.

The majority of people with stomach ulcers complain of pain in the upper part of the tummy.

The pain is usually described as dull, aching, or ??hunger-like?. This pain may get worse after a large meal because a lot of acid is produced when the stomach is over-distends. Some ulcer patients wake up at night due to abdominal pain which, however, resolves after taking a glass of milk or anti-acid medicines.

Ulcer pain may be periodical, lasting up to several weeks with relief intervals of months to years. Vomiting, nausea and abdominal pains sometimes make ulcer patients avoid meals and this results into weight loss. Heartburn may occur owing to reversed flow of stomach acid into the gullet.

In order to confirm the ulcer disease, the patient undergoes a special type of procedure called endoscopy, in which a special tube is introduced into his stomach through the mouth, to visualize the walls of the stomach. The major complications of stomach ulcers are bleeding, perforation, penetration to surrounding organs, obstruction and cancer.

People who bleed from ulcers tend to complain of passing black stools. The black colour is due to the changed blood in the intestines. Bleeding is the most common complication of stomach ulcers. It may be minimal or indeed, life threatening thereby warranting a blood transfusion to correct both anaemia and shock caused by low blood pressure as a result of blood loss.

More than a third of the people that develop perforation die from peritonitis. The chance of dying is however, higher when perforation is accompanied by bleeding. Ulcers may penetrate into the surrounding organs and cause wounds in them. These organs include the liver, pancreas and the bile tubes. Leakage of bile and its salts from the punctered tubes would further complicate the peritonitis.

The deformity that results in the lower portion of the stomach when ulcers in that region are healing causes partial closure of the stomach outlet. Hence, swallowed food, water and stomach juices stagnate and become retained in the stomach.

This retention of stomach contents results in discomfort in the upper part of the tummy, loss of appetite and patients fail to eat much because the stomach cannot accommodate any more food. These symptoms are relieved by an operation aimed at dilating the scarred portion and removal of excess scar tissue.

Some patients with stomach ulcers may eventually develop ulcers in the first portion of the small bowel called duodenum.

Stomach ulcers may give way to stomach cancer. This is the reason doctors cut a piece of the ulcer tissue during endoscopy so that it could be thoroughly examined at the laboratory for cancer.

Treatment of stomach ulcers requires the use of anti-acid medicines, a special combination of antibiotics to eradicate the germs when the cause of the ulcer is Helicobacter pylori, paracetamol to relieve pain, and frequent consumption of little portions of food to neutralize the acid and to stop the stomach from digesting (??eating??) itself.

When medicines fail, an operation may be done in an operation theatre to remove parts of the nerve that controls the production of stomach acid. Surgery is also recommended to sew the perforated portion of the stomach or correct the recurrent uncontrolled bleeding by tying up the bleeding blood vessel. Occasionally, the lower portion of the stomach may be cut off (and later repaired), in order to reduce stomach acid production.

Patients with stomach ulcers should not smoke cigarettes because tobacco slows healing of ulcers. They should not also take Aspirin and other related pain killers like Brufen, Diclofenac and Indocid. Acidic foods, carbonated drinks or spices stimulate the stomach to secrete large quantities of acid and should therefore be avoided.

Consumption of well cooked and soft foods is recommendable. Change of life style may stop the ulcer from reappearing.

10 things that patients hate about medicines

How To Deal With Stress At Work In 10 Awesome Ways

Be the first to comment on "Stomach ulcers: disease triggered by high acid production"