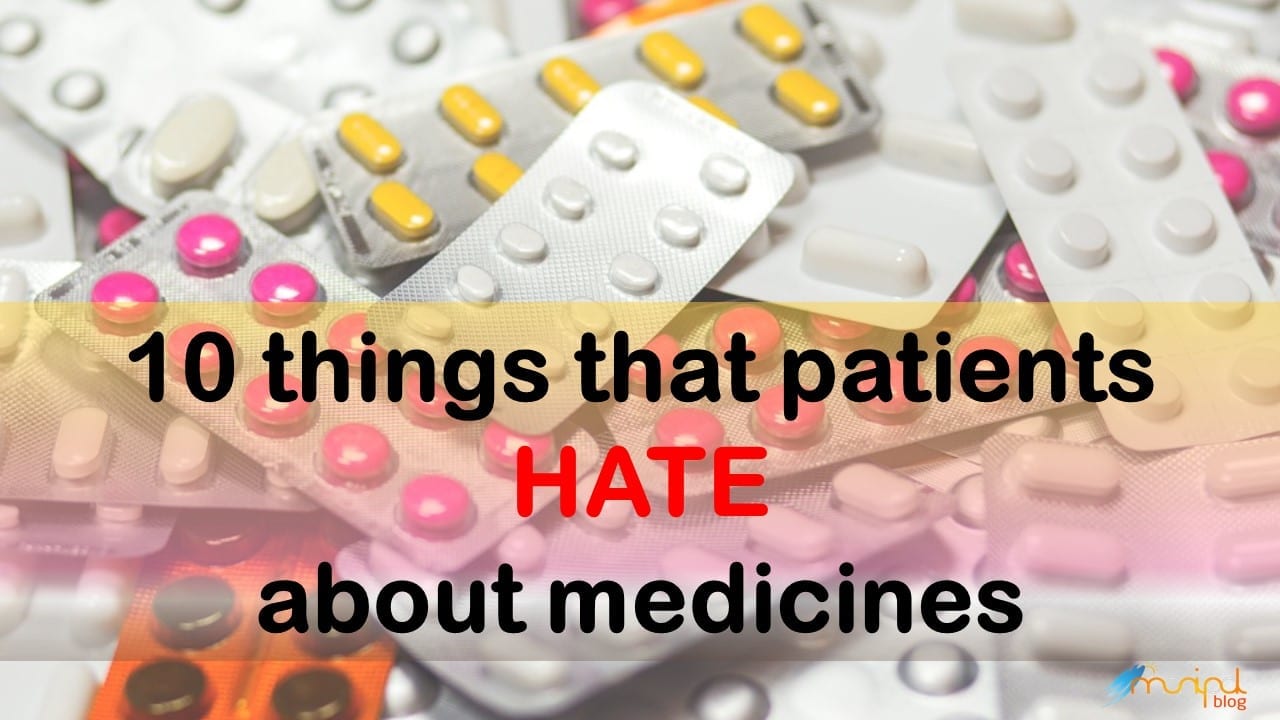 Children hate going to the doctor. Adults are no different. The latter are, however, mature enough to know that their health can be restored only by consulting a physician and taking the prescribed drug. A visit to the doctor has its share of headaches. It begins with a visit to the clinic and then waiting for one’s turn. Unfortunately, the headache does not end there! After the doctor prescribes the necessary medicines, there are many more battles to be won by the patient before normal health is fully restored.

From a physician’s standpoint, here are ten things about medicines that patients hate the most. These are observations taken from more than 20,000 patients over a span of 15 years. The points are listed in the patient’s perceived order of importance.

Very frequently, drugs are promoted to consultants even before they are made widely available. A brand that is promoted by the company, but is not easily available at most chemists’ counters, is a source of frustration to both the patient, as well as the doctor. While the physician understands that the drug will be freely available only when it becomes popular with prescriptions, no doctor wants to trouble his patients hunting for specific brands that are available only at certain chemists.

Medical representatives try to find an easy way out of the mess by informing the physician that the particular brand is available at specific counters. This is needless information for a busy practitioner, whose grey cells are already overloaded with enough data about diseases and drugs. Moreover, in these days of alleged or suspected nexus between various professions, most physicians would like to stay away from such imputations.

A report published in the July-Sept 2005 issue of Journal of Postgraduate Medicine describes the case of an elderly lady, who developed allergic dermatitis due to a wrongly dispensed drug. The lady had been given a gel in place of a cream, which differed in name by just one alphabet! The patient was mad at the doctor, who was accused of spoiling her skin. In this case, everyone suffered—the patient, as well as the physician, on account of the carelessness of the dispensing chemist. Yet, the blame could not be laid entirely at the doorstep of the chemist, since the names of the brands involved were deceptively similar even to the trained eye. How many people can distinguish between the brands Clenz gel, Clearz cream and Clear gel, when they are flashed momentarily before them? Whether it is an educated relative or a qualified chemist, a temporary mis-reading can play havoc with the patient’s health.

A name similar to the prescribed brand causes confusion in the patient’s minds even for educated patients and they feel the need to recheck with the physician. This disturbs the already busy physician, whose consultation gets interrupted. It also requires the patient to make repeated trips or phone calls to his physician in order to verify that the dug dispensed is actually the same as the one prescribed.

The chemist substitutes the prescribed drug with something else, either because the drug has just been exhausted or because he is unaware of the existence of such a brand. Sometimes, the patient is fed up of hunting for the specific medicine and requests the chemist to supply the alternative. Although the chemist may be helping the patient to save his time hunting for a brand that is in short supply, the patient gets angry with the doctor as well, for prescribing a drug that is not easy to get. Very often practicing physicians observe that chemists deliberately substitute drugs in order to take advantage of sales promotion schemes offered by pharmaceutical companies.

Patients spend large sums of money on drugs prescribed to them. While in the case of tablets and syrups the container can be clearly examined; in the case of skin creams and lotions, that is not always possible till one reaches home and unpack. Leakage of lotions or oils from container, use of soft, card paper cartons, which gets compressed, thereby squeezing the tube, are common complaints of patients about bad packaging of drugs. The alert consumer also points out incidences of smudged expiry date on some packs.

Modern technology of sealing ointment tubes has posed new problems. In order to prevent pilfering, most ointment tubes are sealed at the factory so as to be opened by the patient only after purchase. Some aluminium seals are so difficult to open that the tube gets inadvertently squeezed in the process and the medicine squirts out. By the time the tube is opened, a large quantity of the drug is wasted, causing much anguish to the hassled patient.

Some drugs, particularly skin creams, are packed into finger-sized containers going into a large case, which is further inserted into a large pack. While the patient makes a purchase, he expects a lot from the big ‘parcel’. Once he reaches home and opens the box and the next box, he gets the feeling of being cheated.

If the intention of such mega packing is to lull the patient to a feeling that he is getting his money’s worth, it is bad judgement. Surely, the patient will think twice before making the next purchase of the same drug.

Ever since collapsible tube packing came to India, the consumer has had mixed feelings. While it looks elegant and is easy to handle, most collapsible tubes have lot of gas within them, making the patient wonder whether they have been cheated by the manufacturer by filling only half the tube. Packaging experts should find a way of using specialised plastic, which can remain partially dented if part of the drug is removed from the tube.

Tablets are encased in double aluminium (alu-alu) blister packs. Several patients have complained that when the blister is punctured, the tablet flies off like a sixer of Sachin Tendulkar’s bat. The compressed air within is probably the culprit! What next, parachutes?

A brand name that the average English speaking person cannot pronounce while ordering on phone, is a major issue of concern in modern times. Some recent brands have numbers preceding the name which makes it confusing. If the name is easy to spell and pronounce, life becomes easy, not only for the patient but also his relatives, the chemist and the physician.

A common complaint amongst patients is that the pharmaceutical company manufacture expensive drugs and physicians prescribe those drugs. In most cases, it may be the only choice, or the physician’s clinical experience with the quality of the specific brand. However, there are situations, where several good quality brands are available for the same generic drug. In such cases, both the industry, as well as the physician needs to be balanced in their work and prescribe less expensive brands to the less affording patients.

MRP or the Maximum Retail Price is printed on the carton or strip of all medicines as required under the law. Until recently, the local taxes added to the printed price, left room for confusion, among the public as different chemists charged varying rates. As most physicians are unaware of the tax structure of drugs, he is unable to help patients, who ask for clarification of the actual price of the prescribed drug.

With the proposed legislation to standardise local taxes and VAT across the country, the government intends to limit the total cost of drugs below the MRP. Hopefully, once the law is enforced from June 1, 2006, patients and physicians, both will heave a sigh of relief.

The leaflet enclosed with most drugs contain information meant for patients. In almost all cases, it is printed in such small lettering that most of the time even the motivated patient would not be able to read it. The fine print defeats the very purpose of the leaflet, which is meant to educate.

One can understand that using large print type would make the leaflet unwieldy. Yet, the dosage and special precautions should be printed at least two font sizes larger than the rest of the drug information for the convenience of the lay person.

The points discussed clearly indicate that it is not just sufficient for pharmaceutical companies to manufacture and market the drugs to doctors through high-power campaigns. Secondly, it is not sufficient for the physician to heedlessly prescribe drugs, which have been promoted to him without being aware of its availability in the area of his practice. The solution lies in integrating the physician-chemist-manufacturer network in such a way that each knows what the patient needs. A lot of progress has been made in the packaging industry, making life very simple for the patient. Imagine the convenience of the modern mother, who can pack an unbreakable plastic bottle of an antiseptic into the child’s picnic kit without worrying how the careless kid would handle his bag. Yet, advancement in technology is not without its pitfalls. Therefore, drug manufacturers would do well to pay more attention to the finer points of medicine packaging, pricing and availability.

How to Stop Snoring and Finally Get The Sleep You Deserve