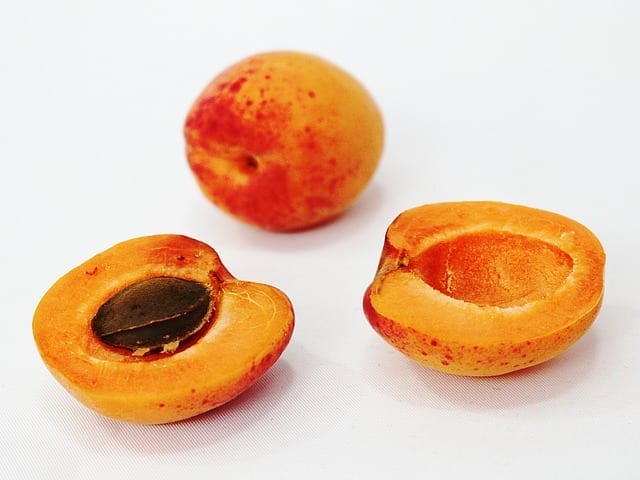 The apricot season opens at the beginning of May and goes through to the end of August or early September, which gives us five months to enjoy this highly nutritious and healing food.

In China over 4000 years ago a bride will have not only had something borrowed and something blue but would have also been nibbling on an apricot. It was prized for its ability to increase fertility, which is not surprising, as it is high in nutrients necessary for the production of sex hormones.

The Latin name for the apricot is ?praecocia? which means precocious or early ripening. It is part of the rose family and is a cousin to the peach, plum, cherry and the almond. In China it first grew wild in the mountains before being introduced to Arab traders who took it with them along the trade routes to Babylon and Persia where they were called the ?eggs of the sun?. Over the following centuries the fruit continued its travels reaching Greece where the juice was known as ?nectar of the Gods, then onto Spain, Mexico and North America. It is now cultivated in all warm climates around the world and used as a sweet and savoury addition to a healthy diet.

WHAT ARE THE BENEFITS OF THE APRICOT?

As with any fresh fruit the apricot is packed with fibre and nutrients including Vitamin A, Vitamin C, Vitamins B1, B2, B6, Vitamin E, Potassium and Iron. Of particular interest from a therapeutic viewpoint are its high levels of carotenoids.

As I have already mentioned carotenoids are responsible for the wonderfully rich reds, oranges and yellow colouring of plant leaves, fruit, flowers and some birds, insects and fish such as salmon. There are around 600 carotenoids that occur naturally and the apricot has one in particular that benefits us and that is beta-carotene.

Beta-carotene is converted into Vitamin A in the body and it is also a very powerful anti-oxidant. It protects the LDL or harmful cholesterol from free radical damage that can cause plaque to form in the arteries. A build up of plaque can lead to both heart disease and a higher risk of stroke.

Apricots are great for fibre and also Vitamin C with some copper. There is also the possibility of something very powerful inside the apricot.

There has been considerable interest in the medicinal properties of the apricot kernel for the last 40 years. There is some controversial evidence, which suggests that it may be a natural cure for cancer but unfortunately there is little support from the scientific arena or the pharmaceutical companies to support this.

IS THERE A BASIS FOR THIS BELIEF IN THE POWER OF THE APRICOT?

Modern man is not the first to believe in the power of the apricot seed. In ancient China over 4,000 years ago, healers used a medicine made from the kernels to prolong life. The current belief is that the apricot seed contains B17 or laetrile and it is this which is such a potent anti-cancerous cure. There is a huge debate on the subject at the moment and if you are interested then I suggest that you take a look at some of the research programmes on the internet.

Additionally the oils from the kernels were used as a sedative, muscle relaxant, in wound healing and as an anti-parasitic.

The apricot?s fibre makes it a gentle laxative, aids weight loss and reduces cholesterol in the blood. Its alkaline properties aid digestion if eaten before a meal and due to the high content of iron it is excellent for anyone suffering from anaemia. Apricots also contain a small but essential amount of copper, which may increase the production of haemoglobin in the blood providing more oxygen and therefore energy for the body.

Over the centuries the juice of apricots mixed with honey has been used to treat fevers and the juice from the leaves appears to reduce the inflammation caused by eczema and sunburn.

So this small fruit has a large reputation and certainly in the fight against the most common modern diseases such as elevated cholesterol, heart disease and cancers it would definitely be worth including in your diet on a daily basis.

WHAT ARE SOME BUYING TIPS FOR APRICOTS?
Apricots are best eaten when still a little firm. If they are not fully ripe when you buy them keep them in a fruit bowl for two to three days and then store in paper or plastic bag in the fridge for up to three days.

Apart from eating them fresh you can use them in cooking by stewing, grilling, baking or roasting and they are delicious as an accompaniment to meat and poultry dishes or in desserts. As a pre dinner snack they are delicious halved and stuffed with a cream cheese and chopped nuts. For a main course serve in a fresh spinach and walnut salad with roast salmon.

If you want to use dried apricots out of season then do buy guaranteed sulphite free brands as there are many people who react to this preservative. Asthma sufferers in particular should avoid any food containing sulphites including inexpensive wine, baked goods, soup mixes, jams, snacks and most dried fruit.

How to Do the Banana Diet