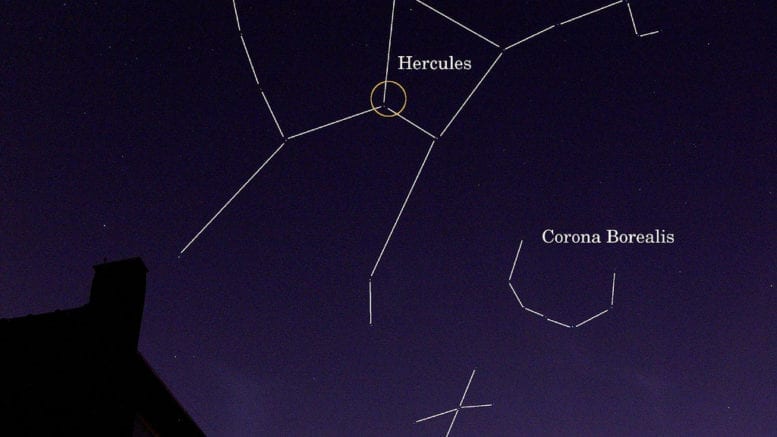 June (and into July) is the month for us to view Hercules, the Greek hero. Son of the god Zeus (a.k.a. Jupiter) and a mortal woman, Alcmena, Hercules was born only half divine. From the moment of his birth Hera (a.k.a. Juno), Zeus wife, was bent on destroying Hercules, the symbol of her husbands wandering ways. The name Hercules was a later form of the original Heracles, a name given to the baby by Zeus in an attempt to appeal to Heras vanity. It was Zeus hope that Hera would not kill her namesake. It was a nice try, anyway.

Hercules is most famous for his 12 Labors, set upon the hero by King Eurytheus. After these labors Hercules was wed to a mortal woman, Dejanira. The couple was happy for a time until Dejanira began to doubt the love of Hercules. In hopes of renewing her husbands love, Dejanira poisoned Hercules with what she thought was a love potion.

In despair at what she had done to Hercules, Dejanira hung herself. Alone and in agony, Hercules ascended Mount Oeta, built his own funeral pyre and laid down on the pile, draping himself in the Nemean lion skin. All this was done in such a dignified and serene manner that the gods were disturbed to look upon the scene, even Hera was touched by his courage and fortitude. Zeus seized upon the opportunity to appeal to the other gods to grant Hercules full godhood. The gods agree and as the mortal half of Hercules burned away, he was welcomed to Mount Olympus and even Hera presented her daughter Hebe to Hercules as his divine wife. To celebrate the ascension of his son, Zeus put his likeness among the stars.

The constellation Hercules contains the Great Globular Cluster M13 and the Keystone of the constellation is made up of the stars Epsilon, Zeta, Eta and Pi. Give Hercules a gander this month and wow someone with your knowledge of how this hero got his place in the heavens.

Be the first to comment on "Star Gazing: Hercules"