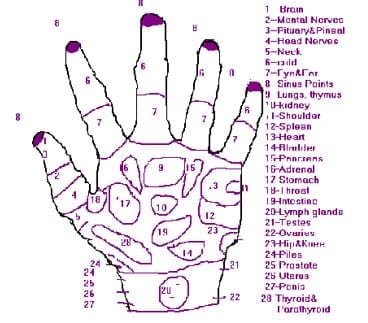 For more than five years, healers have relied on the soothing touch of acupressure to balance the body’s energy and correct ailments and illness.

The ancient healing arts of acupressure and acupuncture involve the use of either fingertip pressure or fine needles to activate a network of key pressure points, Promoting muscle relaxation and increasing blood circulation. Healers have refined The techniques over the centuries, as they have observed and recorded the relationships between healing and touch at various points on the body.

The points used for acupressure and acupuncture are the same. Of course, acupuncture offers a more intense form of stimulation than acupressure, but you may evoke a healing response on your own by practicing acupressure at home.

Acupressurists and acupuncturists use two types of pressure points: local points(pressure points located where the pain occurs) and trigger points (pressure points located far from the site where the pain occurs). Trigger points stimulate a response in distant parts of the body because they lie along a network of electrical channels (called meridians) that run throughout the body. Ancient Chinese healers have identified twelve major meridians, each named after or corresponding to a different organ, such as large intestine, small intestine, or bladder.

The meridians connect the acupressure points in what can be considered an invisible writing system for the flow of bioelectrical impulses or the body’s “essential life energy” known as chi or qi in Chinese. Traditional Chinese healers believe that chi comes in two opposite but complementary forms, yin (passive energy) and yang (active energy). When these two types of chi are balanced, the body is in harmony and in good health. When someone suffers from an injury or illness, however, chi falls out of balance. To correct an imbalance, you need to stimulate one or more of the appropriate pressure points.

Western healers may not accept the traditional explanation for how acupressure works, but the evidence shows that acupressure stimulates the release of endorphins the body’s natural painkillers and mood and immune-system regulators. In fact, studies have shown that endorphin levels in the brain double thirty minutes after a session of acupuncture.

Getting to the Point

To the beginner, acupressure can seem complex and intimidating. But once you begin to experiment with the technique, it will become very natural, and you will be able to enjoy it’s relaxing and healing benefits.

When practicing acupressure, you’ll know you’ve found the correct point, if you feel a tingle, “charge,” or electrical impulse when you apply direct pressure: the point may also feel tender. In most cases, these points are located along with the bones or beneath the major muscle groups.

After locating the correct spot, you will use your thumbs, middle fingers, palms, or the sides of your hands to apply firm, steady pressure. Your finger should be held at a right angle to the body. Start with a gentle touch and gradually push harder, until you feel a deep, even pressure, but not pain. Remember that fleshly parts of the body can withstand firmer pressure than bony areas. During an acupressure session, work the points on both sides of the body to maintain balance and harmony in your body.

Three to five minutes of steady, firm pressure works best, but as little as one minute can begin to promote healing and quiet the nervous system. At the end of an acupressure session, you should feel relaxed and invigorated, but don’t expect that the pain will subside and your symptoms will disappear immediately. Acupressure isn’t a matter of pressing a button and exacting a “cure”. For the best results, plan on spending fifteen minutes or so working through your acupressure points two or three times a day.

Before starting your acupressure session, take a few minutes to relax and get focused. If possible, settle into a quiet, warm, and well-ventilated room. Start with some deep breathing to help you relax.

Remember that acupressure should not hurt. If a point feels painful to the touch, gradually release the pressure and move to another point.

If you feel particularly stiff or tense before a session, consider soaking in a hot bath or applying a hot water bottle or heating pad to the affected area before beginning treatment.

If possible, wait at least an hour after eating before practicing acupressure. Also, avoid scheduling your acupressure sessions during times when you feel particularly hungry.

Psychological disorders: Recognise and Cure them

Depression – Down but not out

Eyes: The Jewels in our Crown

Be the first to comment on "Acupressure – A Hands on Healing"